Bam! Ninja surprise! – How to Win Friends and Influence People in the Social Media Era

Home/Articles/Bam! Ninja surprise! – How to Win Friends and Influence People in the Social Media Era
Previous Next

Bam! Ninja surprise! – How to Win Friends and Influence People in the Social Media Era 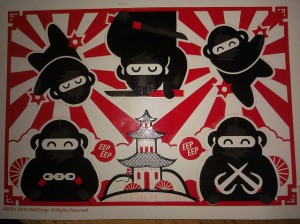 Two weeks ago, I switched newsletter providers to MailChimp. MailChimp is known as a low-cost SOHO email provider with cheeky humor and copious references to Ninjas.

Over the past few years, they’ve been getting a lot of buzz and customer goodwill. Curious to give them a try, I signed up, dropped my old provider, and hoped for a smooth transition. Setting up my campaign was straighforward. It’s when I pressed “Send” that the trouble started. The MailChimp interface promptly said: “Sending: Started at Jan 30, 2011 10:57 pm” — and there it hung for over an hour.

I re-queued the campaign and tried again. Same problem. Frustrated, I emailed their customer service. A day later, I received a response. The customer service rep politely informed me that they weren’t sure what was causing the problem and the development team would have to investigate. Two days later, I received another email saying the development team wasn’t sure what the problem was either, that they canceled the email in the queue, and that I should try again. Like Groundhog Day, I tried again and got the same problem.

Now feeling very frustrated, I jumped on Twitter and broadcast to the world, “Anyone else think that MailChimp sucks? I’ve been stuck in queue for 72 hours. Is it growing pains?” About 3 minutes later, I received a reply via Twitter from MailChimp. We traded tweets back and forth and they provided some basic diagnostics — all over again. When the problem couldn’t be solved, they asked me to contact customer service using “online chat perhaps?” Now fuming, but deciding to give it one more try, I hopped onto a MailChimp online chat.

A customer service agent named Nate answered quickly. After 15 minutes of Q&A, Nate uncovered a script error. That was it. Problem solved. Finally free of this headache, I tweeted “@mailchimp solved the issues. Special thanks to Nate!,” crossed it off my to-do list, and got back to work, feeling reasonably happy with the MailChimp product.

About a week later, I get a postcard in the old-fashioned mail. On one side, there’s a set of Ninja stickers, on the other a handwritten note from Nate at MailChimp. 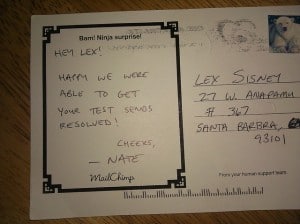 In an on-line world, off-line touches stand out.

I was impressed. And my kids love stickers! How did they know?

Check this out: In the space of two weeks, I went from an openness to trying MailChimp, to complete frustration and aversion, to feeling resolved and neutral, and finally to being a MailChimp fan. How did this happen?

Here are some key takeaways that every business can learn from this episode:

Successful companies in the social media era will be those that recognize the power of community and find ways to listen, influence, touch, and leverage that community to win fans and prosper.