The Physics of Fast Execution

The Physics of Fast Execution 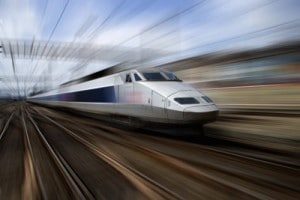 Let’s do a thought experiment. Imagine that you’re standing in the middle of a racquetball court surrounded by four walls. At your feet is a basketball. First, notice how the basketball just tends to sit there. That’s called inertia. In order to get the ball to do something, you have to apply a force to it. In this case, you give it a kick and the ball rolls along the floor, bounces off the wall, and careens in another direction before coming to rest again. Next, you walk and retrieve the ball and bring it back to the center of the court, place it on the floor, and this time, you give it a really hard kick. What happens? The ball rolls even faster across the floor, bounces off the wall with more power, and travels further in a new direction than the first kick. In essence, you just experienced all three of Newton’s laws of motion.

Newton’s three laws of motion will shed light on the speed and direction of your organization. If you want to move your organization forward quickly in a chosen direction, you should understand these laws and how they apply to business execution. Put another way, if you want to be successful, work with – not against – the physics.

The First Law of Motion

Newton’s first law of motion is about inertia. Inertia is a recognition that an object will tend to do what it’s been doing, unless acted upon by an imbalanced or outside force. In our thought experiment, that’s why the ball tends to stay at rest in the middle of the floor until you do something, like give it a kick. Inertia works in both ways, however. Once the ball is in motion from the kick, it tends to stay in motion too, until an outside force such as gravity, friction, or a wall acts upon it. Once the ball comes to rest, it will remain at rest until it is acted upon by another force. 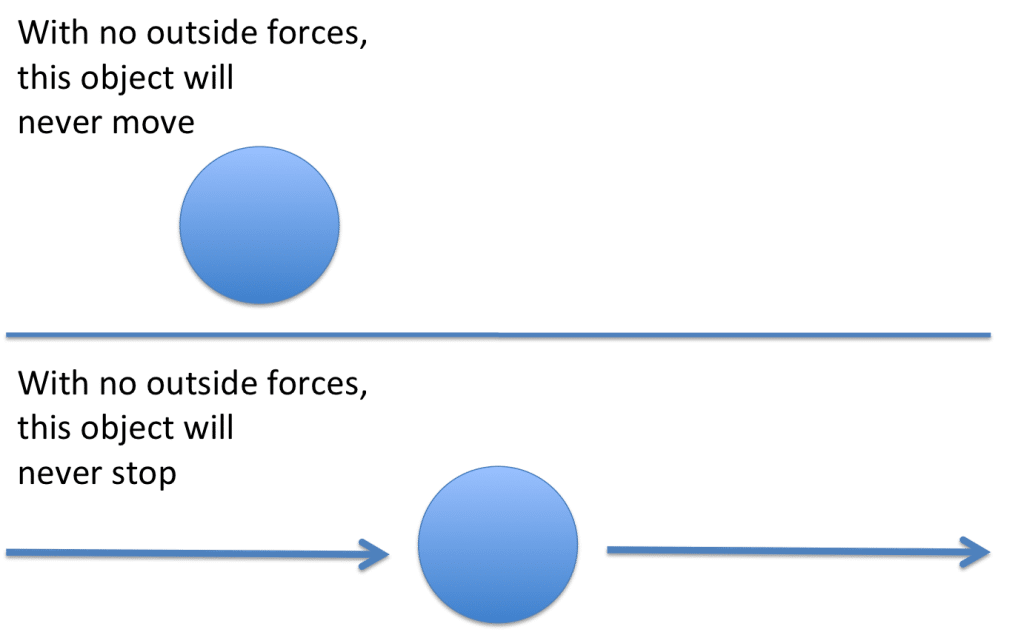 Obviously, an organization isn’t a simple object like a ball. But you can still use the lens of inertia and see how it impacts an organization. Basically, because of inertia, an organization will tend to continue to do what it’s been doing unless acted upon by another force. That is, if your organization is slowed, stymied, or stuck, it will continue to act that way unless you do something to change it. And the greater the inertia, the greater the effort required at getting it to move in a new direction. On the other hand, if your organization is currently experiencing a lot of momentum, then like a train roaring down the tracks, it will be hard to slow down. Inertia can work in your favor too.

In Newtonian physics, “force” is a push or a pull on an object and is defined as either “balanced” or “imbalanced.” An imbalanced force is one in which either the push or the pull exerts an unequal force and cause the object to move. If all forces are equal or balanced, there is no motion.

In Organizational Physics, a “force” is not a push or a pull on an object, but a force of change applied to an organization. The force in this case is the Producing, Stabilizing, Innovating, or Unifying force or some combination of these.

Just as in Newtonian physics, one or more of the forces must be imbalanced in order to effect change. For example, if you want to drive your organization forward in terms of productivity, you’ll need to apply more Producing force and less of the others. To have the organization become more stable, you’ll need more of the Stabilizing force. To help it discover new opportunities and avoid future threats, you’ll need to amp up the Innovating force. And to keep the organization unified as a whole, you’ll need the Unifying force at work. Balancing and unbalancing the right forces in the right sequence, while keeping entropy low and integration high, is the art and science of Organizational Physics.

The Second Law of Motion

Newton’s second law of motion is about the relationship between force, mass, and acceleration. In our thought experiment, when you kicked the basketball harder, it had more acceleration and went further. There’s an equation in physics that explains this and is written F=MA (Force equals Mass times Acceleration). Basically, F=MA tells us that if you take two objects of the same mass and hit one with force, you’ll have acceleration. If you hit the other with more force, you’ll have more acceleration. That’s why if you were to take two identical basketballs and kick one really hard, it would accelerate to a certain speed and travel a set distance. Kick the other one less hard and it will accelerate to a slower speed and travel less distance.

While any frustrated CEO would surely love to simply kick their organization in the ass to get it to accelerate, it’s obvious that that’s not how things work. But why is that? Why can’t a CEO, a teacher, or a parent apply a force of change to the organization and make it move quickly and easily just like a ball being kicked? If F=MA, then why don’t your kids pick up their toys when you tell them to? Why doesn’t your sales team respond to the force of your incentive plan? Why won’t the market readily respond to the appeal of your advertising?

Here’s an example to show why mass is resistance to change and not size or volume. The United States of America is a very large, complex organization. Imagine that you have been elected President. You want to implement changes that you believe will benefit all. However, there are over 300 million people, each with different levels of needs, wants, desires, and perceptions, who are all represented by different politicians, who are in turn supported by different corporations and political action groups. Your legislative agenda is seen as beneficial to some segments and as a terrible loss to others. Therefore, the mass is very high. Even though you’re the President, it’s very, very hard to push your agenda forward because the resistance to change is so great.

There’s a saying in Washington: “Never lose the opportunity of a good crisis.” What does this mean? When there’s a crisis, the normal resistance to change is lowered because the system is under threat. When this occurs, it becomes much easier to get new legislation passed. For example, after the 9/11 crisis in the United States, new legislation called the Patriot Act was quickly passed. This legislation strictly curtailed civil and constitutional liberties and would have been unthinkable without a preceding crisis that first reduced the resistance to change.

I’m not advocating that you create crises to get your organization to do something differently. Rather, I’m making the point that mass is not size or volume but resistance to change – and even a very large organization, such as a country, will move quickly in a new direction if the resistance to change is low enough. Once the organization gets moving in that new direction, it will tend to stay on that course until another force causes it to stop or change.

The Third Law of Motion 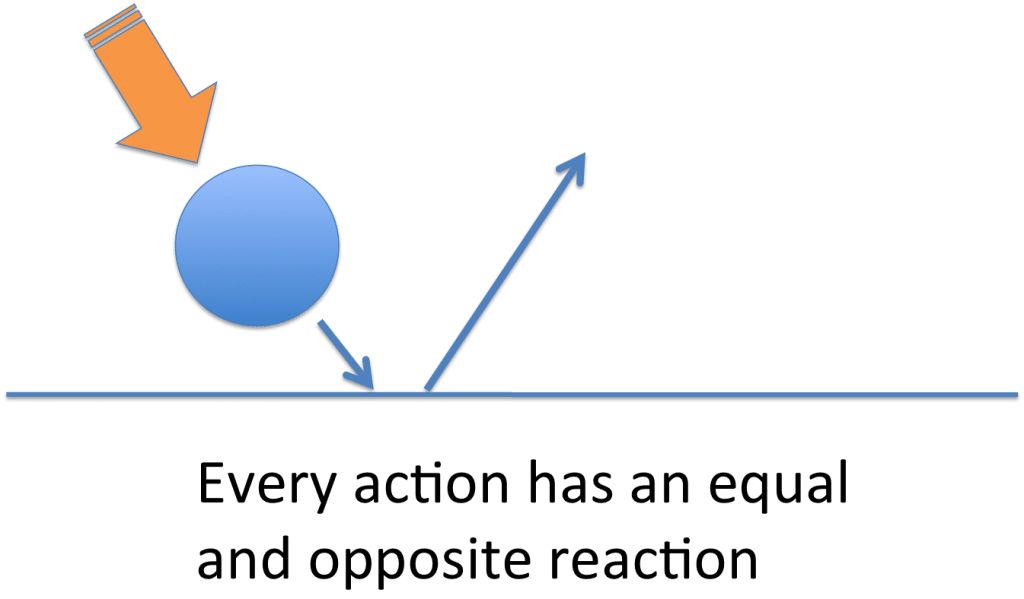 For example, imagine that your business is expanding rapidly. Congratulations! This is something you’ve wanted for a long time and you’ve worked very hard at it. You’ve finally got the momentum you were seeking. But guess what happens next? Faced with the new growth, the business’ administrative systems and people are falling apart and must be managed to keep pace. That’s an equal and opposite reaction. If you don’t manage the reaction well, it will act as a drag on your momentum. Or, with all the work and effort you’ve put into the business, your family life is stretched thin. If you can’t find a way to restore harmony, the family system will suffer from an equal and opposite reaction to your booming business.

The Secret to Executing Fast

So how do you make good decisions and implement them quickly? The secret lies in how the organization’s mass is managed. That is, if the mass is manageable, then it’s easy to apply a force of change and get the organization to do something new. Within organizational dynamics, the challenge in managing mass is that resistance to change is scattered throughout the organization. It lies within the individuals making the decisions, those doing the work, and those who can help, hinder, or influence the results. Therefore, no matter how much or what type of force you attempt to apply, when the organizational mass is widely dispersed, there’s nothing that can be leveraged to effectively push or pull against the organizational inertia.

Think of it like this — the reason that your organization doesn’t behave like an object — a basketball, for example — is because its mass is scattered all about. While a basketball is neatly self-contained and you can move it at will, your organization can feel more like a bunch of shattered glass loosely strewn about. With such a dispersal of mass, no matter how much of a force of change you try to apply, it won’t be very responsive.

In order to effect change, you must first gather in the organizational mass.

If it was possible to gather the pieces of glass and glue them back together – in other words, to make them behave like a ball again – then it would be easy to give that ball a push. Similarly, if you were able to gather in the organizational mass, then it would begin to behave like a ball and change its speed and direction. Once you gather in the mass and reduce the resistance to change, you can then hit it with a force, such as a decision or a directive, and it will tend to rapidly accelerate in a new direction.

So what are you trying to accomplish with these subsystems? In a word: Alignment. Your objective is to align each of these subsystems with your chosen strategy. By creating alignment the organization’s mass will be contained and headed in one direction. But without it, your organization will experience friction that prevents it from accelerating. In the worst-case scenario, it will eventually cease to function altogether. This means that if you want a fast-moving organization that goes in the right direction, then you’ll first need to create alignment within the subsystems. In fact, rather than taking action in a misaligned environment, save yourself the time, energy, and resources (not to mention the headaches, heartburn, and sleepless nights) by first aligning the Execution Diamond and then enacting change.