While few people are intellectual geniuses, each of us has an area of outstanding ability that allows us to perform at a high level and adds to our overall energy and satisfaction. This zone of activity is what I call your Genius Zone. What is your own Genius Zone? You can identify it and activate it using a simple formula: 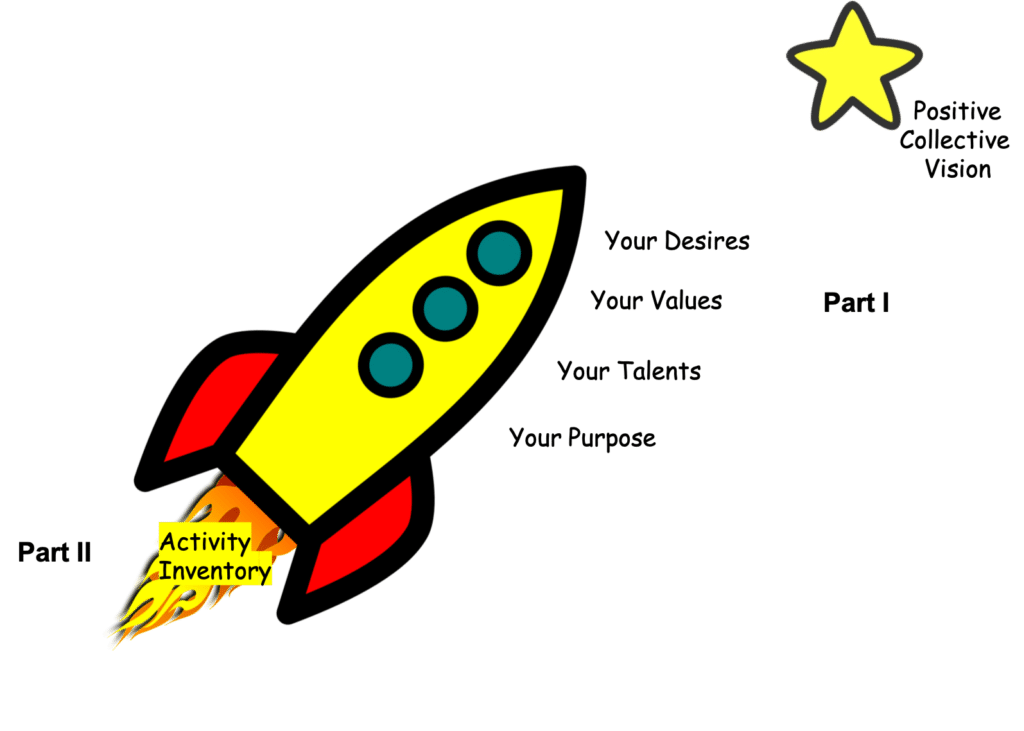 Basically, add all of those things together and allocate your time and energy to be more “in the zone” and you’ve got it. When you’re operating from within your Genius Zone, you experience high energy gains. You tend to feel deep engagement, high personal satisfaction, and elevated productivity. You also produce outstanding work. When you’re operating outside of your Genius Zone, life is more haphazard, less fulfilling, and you have to fight vs. flow.

Leading from your Genius Zone means that you design your activities in such a way so that you spend most of your time and energy engaged in those that add to your energy, joy, and satisfaction and at the same time, create the most enterprise value for your business.

If you’re struggling right now to grow your business, manage your team, find the right strategy, and to do it all quickly, then this concept might seem pretty far fetched. You don’t have enough time and energy to do all the crap you DON’T want to do, so how can you find the time and energy to do the stuff you WANT to do?

I hear you. But the fact is that you want breakthrough levels of performance in your life or work then leading from your Genius Zone is not a luxury but a necessity. For instance, if you look at the most successful businesses in history, the ones that assume almost transcendent, iconic status — IBM, Apple, Ford, Disney, Walmart, Standard Oil, HP, Intel, Coca-Cola, Microsoft, Google, Amazon, Virgin, etc. — you’ll see that while each founder had his own unique approach and management methodology, each also designed their business to be symbiotic with his or her own innate genius.

Many people erroneously believe that these world-changing entrepreneurs were just born special. Not true. We’re all shaped by the environments we inhabit. What’s truly special about these entrepreneurs is that they designed their time, relationships, and management structures so that they could spend most of their time and energy working form their respective strengths and passions.

The first step in leading from your Genius Zone is to know what you are really at genius at! If you’re constantly running from one mini-crisis to another in your work, then it may take a bit of introspection to get a sense of what activities actually represent your Genius Zone and how to shift them. If you’d like to explore this further, you can do it easily by completing this free interactive program: Your Genius Zone. Enjoy :-).

The Free Genius Zone program is divided into 2 parts:

Part II: Activity Inventory asks you to reflect on how and where you are investing your time and energy and where you want to make changes to activate more of your Genius Zone right now. This also takes about 30 minutes to complete.

I’m offering this program for free because I asked myself this same series of questions over a decade ago and it changed my life in pretty miraculous ways. I’m just happy to share it with others who are committed to making lasting change in their own lives.

I also believe that if most people were aware of their innate genius and made a commitment to live and work more from that zone, then we’d have a lot more prosperity, engagement, and systems thinking alive in the world. So this program is here for you if you want to invest the time. You’ll get out of it exactly what you put into it. That’s it. Here’s the link again if you missed it: Your Genius Zone.

How to Lead More From Your Genius Zone

It should be intuitive that if you’re going to live and work from your Genius Zone then you’ll need to surround yourself with others who are a genius where you are not. In addition, you’ll need the right structure, approach, framework, and guidance to stay on top of your game. One of the best ways to learn how to do this is to mirror others who are already expressing a high-level of genius. One of my favorite examples is Phil Jackson. 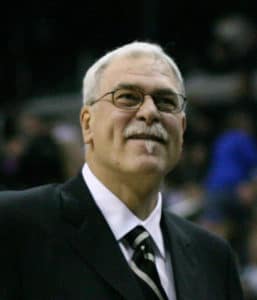 As you know already, Phil is a living basketball and coaching legend. Here’s a snapshot of his career from Wikipedia:

When someone has won at every level like Phil, he probably has something valuable to teach. Here are the top 4 things that I took away from his book that are applicable to how you think about growing your business…

Phil is famous for being a disciple and a champion of the Triangle Offense (Phil learned the triangle from Tex Winter, who was a long-time assistant to Phil and who, in turn, learned the system from Hall of Fame coach Sam Barry).

The goal of the Triangle is to create a base structure on the floor (guess what? it looks like a triangle!) so that good spacing between the players is maintained and allows them to make adjustments on the fly, based on what the defense is doing. When the triangle offense is working well, it’s simultaneously hard to stop and a beautiful thing to watch:

Your business needs a system and philosophy you believe in too. There are many systems you can choose from but any good management architecture will at a minimum have these characteristics:

When you’re implementing your system, be prepared for some resistance. Much of 11 Rings is about how a leader can instill buy-in into a system, even when dealing with monstrous egos (like Michael Jordan and Kobe Bryant), that ultimately allows the players to flourish as a team.

#2 Lead to the Next Stage of Development. Then Lead Again.

Obviously, you can’t just show up at work tomorrow and declare, “I’m a genius! This is what I’m doing from now on! Suck it!!” Disaster. Instead, you need to meet the environment where it’s at now, and then lead it to the next stage of development. All the while you’re letting go of activities that the tribe is better at than you while embracing those activities that you’re a genius at.

This would be an impossible task unless you also had a universal framework that reveals the underlying patterns at work at each stage of development. Phil’s favorite approach to understand the stages of team development is a book called Tribal Leadership. It’s a good framework to understand how the language of the tribe reflects its current stage of evolution.

I would say that in addition to understanding the current values-state of your tribe, you also need a framework that reveals the stages of development in all aspects of your business including the products, markets, and execution lifecycle stages of your business. I’ve spent the past decade developing such a framework that I distill in my book Organizational Physics: The Science of Growing a Business. Check it out if its of interest to you.

Transitioning to your Genius Zone can seem overwhelming and complex. And if you’re trying to do too much too soon or are overlooking a glaring hole in the organization, it is. But if you have the right framework, then what once seemed complex is now much simpler and even a lot of fun. If you get it right, then it’s not only the path to greater satisfaction, it’s the path to building a transcendent business too.

#3 Time Your Rhythm to the Stage of the Season

A favorite insight I took away from 11 Rings is that early in the season Phil would coach really hard in practice but be mostly laissez-faire during the games. His goal was to get the team to rely on and trust their teammates on the floor rather than looking to the sidelines for help. They had to learn to work their way out of their own problems on the court. The goal was to sacrifice some possible early season wins in order to build greater resiliency and self-reliance for the championship season down the road. Good advice for every leader.

In business we have it much tougher. We’re under constant pressure to go-go-go. One quarter blends into the next and one year into the next. It’s easy to lose sight of the stage of the season, confuse activity for effectiveness, and waste our time and energy on the wrong things at the wrong stage. Over time, this leads to burnout and disengagement.

The key point is that there is a rhythm and pace to business just like there is a rhythm to nature. It can’t be go-go-go all the time. You must consciously design the right rhythm into your business practices or you’ll end up winning the preseason but failing to win a championship.

In addition to the Triangle Offense, Phil is also known for taking a holistic approach to coaching that is influenced by Eastern philosophy, earning him the nickname “Zen Master.” In the book, Phil talks about how it was challenging early in his career to feel like he could really be himself with other players and coaches. Would they accept a tofu-eating, meditating, philosophizing hippie? But once he embraced his uniqueness fully out in the world, he developed a powerful coaching style that was impossible for other coaches to emulate.

The same is true for you. In my coaching practice, one of the first tasks I always undertake is to identify your Genius Zone. What is it that you are uniquely gifted to do that adds to your energy and joy? How can those genius-like qualities come forward more in your life and work? Once we’re clear on your genius, then we design everything in the business — the strategy, structure, team, and management rhythm — to support your being in that zone as much as possible. Then a funny thing happens. When you do what you’re a genius at — and if things are designed correctly — then the company scales too.

It’s not so crazy. Just look at Phil Jackson. His genius is understanding the subtle nuances of behavior and teaching others how to be relaxed and unified as a team in high-pressure situations. The Triangle Offense supported his genius. So did the assistant coaches who were strong in areas where he was weaker. Phil looked for and coached players to buy into his system while simultaneously expressing their own individual genius on and off the court. When it all comes together, it’s quite a ride.

If you’re in search of a system that allows you to manage your business more like a champion and scale in a sustainable way, then this summer I highly recommend you also read my book Organizational Physics: The Science of Growing a Business. It brings together all four of these aspects – #1 Have a System. #2. Lead to the Next Lifecycle Stage. Then Lead Again. #3. Time Your Rhythm to the Stage of the Season. #4 Be Yourself — into a singular meta-level framework that tells you exactly what to do next and makes the complex simple.