Walk Across the Valley

Home/Articles/Walk Across the Valley
Previous Next

Walk Across the Valley

Have you ever wanted something only to rue the day you actually got it?

Recently, I had a simple but profound lesson that really taught me the value of “be careful what you wish for.” I’m really lucky to live in a beautiful place. Take a look. Here’s the view from our deck: 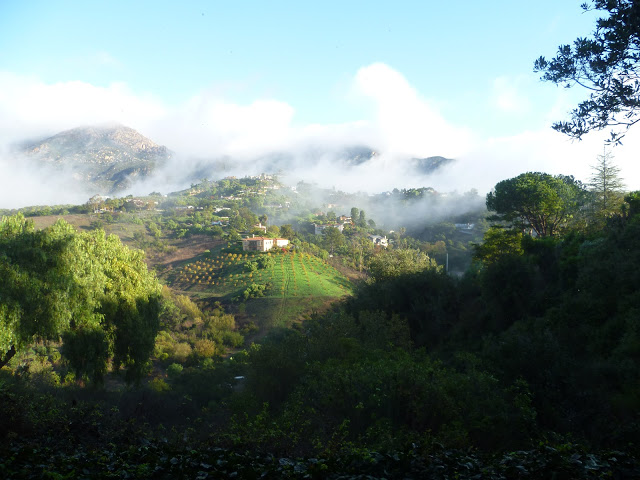 Before you make a decision, walk across the valley and see what the view’s really like from that new angle.

It’s an awesome view right? Well, when my family and I first moved here, I certainly noticed that it was a beautiful view. Almost immediately, though, my internal monkey mind started telling a story that that the view from across the valley must be even grander.

“Wow,” I thought, “the view from here is pretty spectacular but the view from that beautiful house across the valley must really be great!” I even felt inferior in some sense, as if we had ended up on the “wrong” side of the valley. The truly good stuff was clearly over there.

Well, I’m an idiot. One day my wife and I took a hike across the way. When we got to the other side and looked back, what do you think we saw? A really mediocre view compared to our side of the valley. The mountain ranges and textures that made our own view so spectacular were missing on the other side. Duh!

I realized in that moment that I had spent much of my life assuming things were always better on the other side. From afar, they looked more beautiful or interesting or desirable “over there.” I often focused blindly on simply getting “there” even if “here” was actually better.

I know I’m not alone in this error. Many highly driven people make the mistake of focusing on getting something new, even if it doesn’t make any sense to do so.

For instance, I have a friend who built up a successful company over the past decade. He worked hard, lived a nice lifestyle, and seemed to authentically enjoy the industry, clients, and his employees. Basically, he had a really good thing going and he knew it.

But my friend’s vision had always been to sell his company. The story he told himself was that if he’d work hard to build up his business, then one day he could find a strategic acquirer, sell it, and do something new. He didn’t give too much thought to what he would do after the sale. He was exclusively focused on making the exit happen. He told himself that he’d figure out what to do once he had the time, money, and freedom to really think about it.

You can probably guess what happened. He actually did sell the company, but it turned out to be a disaster. He signed a three-year workout clause with the acquiring company. They made promises to keep the existing staff and give his business complete autonomy within their portfolio. That lasted for about 60 days before the new owner decided to change strategic directions. They made a call to shut down his business (now theirs), fire the staff, and sell off the assets.

Today, my friend has a little bit of money in the bank but he’s miserable. He’s cut off from the work he enjoyed, the team he built and thrived with, and the clients he used to serve. More than that, he’s really, really pissed off at how things went down. He feels cheated by the acquirer and blames himself for wrecking a really good thing.

I can contrast this story with another friend of mine who’s also successful entrepreneur. This friend had made his fortune in the commodities business and moved to Santa Barbara to “retire” at 40. He quickly got bored and decided that he wanted to get into the restaurant business. A dream that he always wanted to pursue.

But this friend did something really, really smart. He found a restaurant for sale that seemed like it might be a great purchase. But he didn’t go to the owner and make an offer. Instead, he dressed down and went to the owner and got a job as a busboy! I asked my friend why, being independently wealthy and with a world of options at his fingertips, he would waste his time being a busboy?

My friend responded, “Because I want to try on the restaurant business before I commit to it.” He worked at the restaurant for about a month. He learned the ins and outs of that business by doing the work, getting a firsthand account of the operation, and befriending the owner to get more inside information.

Ultimately, he decided that the restaurant business wasn’t his game. The margins were too thin and the hours too long. But isn’t that perfect? He only risked his ego and some time to suss out what his new reality would be like after the potential decision was made. The value he got of NOT buying a restaurant is priceless. Otherwise, he would have gotten stuck owning an asset he didn’t really want to own. His kind of methodical thinking and willingness to “try on” the future before making a commitment is certainly one of the reasons this friend is so successful.

I’ve tried to take this lesson to heart by slowing down my own decision-making process long enough to really investigate (or even intuit) what life would be like after I make a certain decision. In essence, I try to walk across the valley and see what life over there is really like before wishing I had it any different. How about you? Are you wishing you had it different when what you’ve got right now is perfect? How can you tell if you’re too focused on just getting it done versus making the right decision?