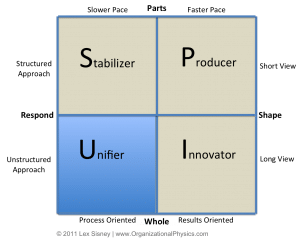 The Unifier is primarily focused on who is involved in a situation and the interpersonal dynamics of the group. To get an immediate sense of the Unifier’s qualities, think of a very likeable, gregarious, warm people person. That’s a Unifier. If you put this person in a rowboat and say “Row!,” what will they do? Well, they’ll want to know where everyone else is! You can’t expect them to row all by themselves. They’ll want a team of people, ideally their friends, to climb in the boat and row together.

Unifiers are excellent communicators and team builders and are especially good at listening and empathizing. They tend to make everyone feel uplifted, listened to, and respected, thus improving collaboration and loyalty in the workplace. They always have time for a chat and seem genuinely concerned with how you’re doing and how they can help you. They’re excellent at smoothing things over and intuiting how someone else is really feeling. For example, if a Producer and a Unifier went on a sales call together, the Producer would only interpret what the client was actually saying (the literal level) while the Unifier could tell exactly how the client was feeling beneath the words (the non-literal and emotive levels). Our best Unifier qualities are our ability to create rapport, understand and motivate others, build cohesive teams, and create sound organizational cultures based on caring, empathy, and loyalty. Without the Unifier force, we would have no ability to respond to change efficiently because the organization would not be able to act as a whole.

When the Unifier trait is extreme, we call it a Big U. A Big U is like a politician who always seeks to curry favors and plays the political winds to his or her advantage. One the one hand, Big U’s value and leverage personal relationships; on the other, their words or actions can’t really be trusted because their loyalty will shift with the prevailing political winds. The Big U comes to work when expected and leaves when expected. If they have an office, it’s probably very warm and inviting. Big U’s love to have meetings because this gives them a chance to connect with others and gauge where they really stand on an issue. During a meeting, they prefer to sit and listen while others do the talking. Their biggest frustration is when others won’t engage with them in a dialogue, shut them out, or keep up a stoic guard. Their common complaint is that others aren’t working well together and thinking of the team.

The answer to most problems for a Big U is to gather input from others and process feelings – both their own and others’. This takes time and that’s why a Big U tends to move at a slower pace than a Producer or Innovator. Therefore, when getting schedule estimates from a Big U, recognize that before committing to any schedule, the Big U will insist on getting input and buy-in from those who will be impacted. The result will be a very safe, prudent schedule that will account for the needs of all the different constituents. Thus, there will likely be several ways to improve the speed or direction of the plan if you’re willing to step on some proverbial toes.

If you went into their office, the first thing a Big U would do is warmly invite you in, offer you a coffee, and give you all the time in the world. When this person supervises others, there are usually a lot of other Unifiers on the team because the Big U values camaraderie and teamwork. They delegate frequently but don’t tend to follow up too vigilantly because that can create conflict, something the Big U prefers to avoid.

Sometimes a Big I can appear as a big people person or a Big U. However, the Big I is really motivated to connect and influence people to move their own vision forward. When the time for selling the vision is through, a Big I will want to retire and be alone. For a Big U, however, being with people is a joy unto itself.

The 2001 movie Legally Blonde shows a comic scene of a Big U in action. In it actress Reese Witherspoon is watching some inter-office conflict emerge. So what does she do? She tries to restore group harmony using the snap cup. Ridiculous as it is, this scene captures the idea that Unifiers value keeping conflict low and group intimacy high.

Big U Under Stress

During a crisis, the Big U can fail to be decisive. There are too many conflicting viewpoints and hardened positions for a Big U to have the time to navigate. When under extreme duress, Big U’s act as if they’re imploding under the weight of their own emotions. It’s hard for them to see the big picture, do the work, make decisions, or even get out of bed. They’ll need lots of time and companionship to process their emotions, restore their energy, and get reinvigorated again.

Big U and the Other Styles

The Big U gets along really well with all the other styles, especially those in power — all other styles, that is, except for other Big U’s with political power! In this case, they become highly suspicious and seek to either carefully curry favor or quietly usurp the other Big U entirely. The Big U prefers to create a harmonious, low-conflict environment. But if they ever feel betrayed, they’ll really castigate the offender.

Managing a Big U

If you’re managing a Big U, you will need to give them a lot of one-on-one attention and show that you care about them personally. Be aware that because a Big U can be outstanding at helping a group work in harmony, they won’t work as hard as a Producer, with as much detail as a Stabilizer, or with as much creativity as an Innovator. If you share about your personal life, ask about their own, take them out to coffee or lunch, and give them praise and support, you’ll have a loyal employee.

The best way to get a Big U to take action is to allow them to help you. Big U’s love to help people who are important to them because they want those people to be happy and feel good about their relationship with the Big U! If you have a loyal Big U working for you, they can move mountains simply by opening doors and working their personal relationships.

If Your Boss is a Big U

If your boss is a Big U, expect to have a fun and lax work environment when things are good. Also expect to have a poisonous, back-stabbing, politically rife environment when things are not. Either way, who you know and who you’re connected with are more important than what you accomplish. The Big U makes decisions based on personal likes and dislikes and on the prevailing political winds. When making a request, you can expect to hear “yes” and “no” a lot, but you can’t take either one to the bank. This is because Unifiers tend to change their minds based on what others are thinking and feeling and who’s in power at a given time. Therefore, a “no” from a Big U is more like a “maybe…could be…we’ll see how it all plays out.” And so is a “yes.”

Summary of the Unifier Style

To recap, the Unifier qualities are what allow us to be excellent connectors, communicators, and bonding agents for a group. Unifiers love to be with people, keep conflict low, and create a harmonious environment. When taken to an extreme, the Unifier morphs into a Big U to become a political animal, saying one thing and doing another to ensure their own survival and advancement. 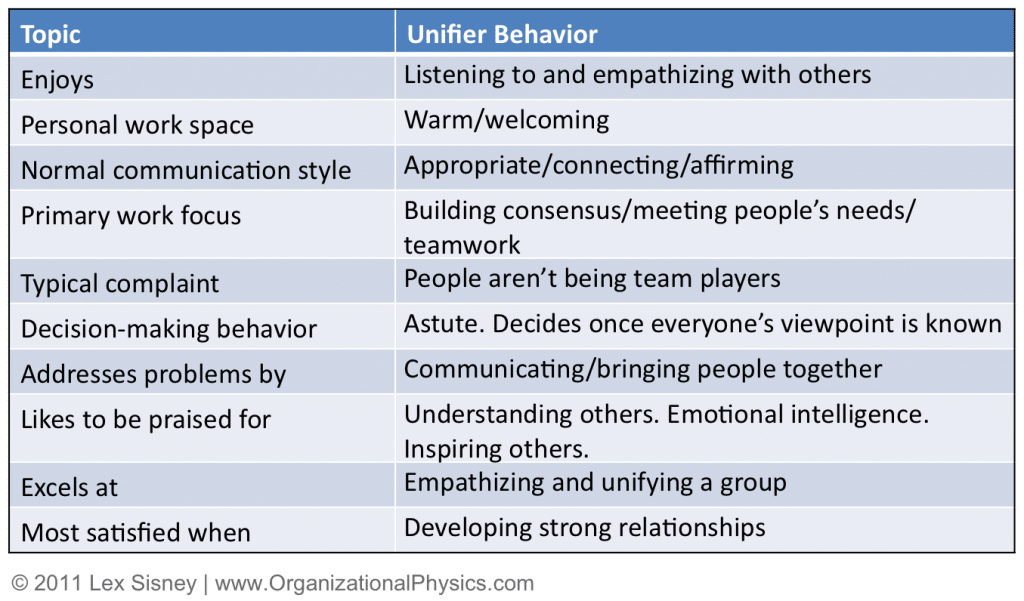 Next to The Key to High Performing Teams