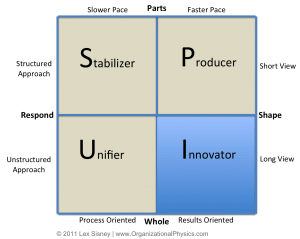 The Innovator is focused on driving change while finding new and better ways of doing things. To get an intuitive sense of the Innovator’s qualities, think of a dynamic, creative, big-picture person who has a plethora of new ideas and is usually excited by the latest one, until a new one strikes again. That’s an Innovator. If you put this person in a rowboat and say, “Row!” What will they do? Well, they’ll start to come up with new ideas! “Why don’t we put a sail on this baby? How about a glass bottom? That would be pretty cool! Come to think of it, a 250hp motor would do just the trick; I bet we can find one at the marina. Be right back.”

The Innovator has a tremendous ability to peer into the future and to anticipate how seemingly disparate trends will (or can be made to) merge together. They are highly conceptual and get easily excited about new ideas and opportunities. Because an Innovator can sense change occurring faster than other styles, they spend a lot of time trying to get others to see the same thing they do. They usually attempt to do that by explaining the idea and sharing their enthusiasm, and by trying to get others to understand and be enthusiastic too. Our best Innovator qualities are our ability to anticipate change, to be imaginative, charismatic, and inventive. Without the Innovator force, we would have no ability to adapt to changes in our environment and we would quickly become irrelevant or extinct.

When the Innovator trait is exceedingly strong, we call it a Big I. A Big I is like a mad genius. It’s always cooking up one crazy sounding idea after the next. The Big I comes into work whenever they want and leaves work whenever they want. If they have an office, it’s likely a testament to their own unique individuality and creativity. The Big I doesn’t like to have meetings unless it’s to discuss a new idea and as long as they get to do most of the talking. Their biggest frustration is that things are stymied in production and implementation or that they get bogged down in managing release schedules and milestone dates, rather than working on the next new thing. Their common complaint is that others “don’t get it.” Their answer to most problems is to come up with a new idea.

The Big I is not usually comfortable giving schedule estimates because they recognize they just don’t have the interest (or a clue) as to how long something will actually take. Those are details for others to figure out. But they’re happy to give predictions on when market trends will converge. However, because they see a future (not necessarily the accurate future) so clearly, they tend to overestimate when something will actually occur. Therefore, if they think the market demand will tap out in two years, in reality it’s probably just getting started then. But if and when demand finally does arrive, the Big I is already bored with it — OMG, that’s so last decade! — and has moved on to yet undiscovered things.

The Big I gets bored with the status quo really easily. Their past creations are never good enough because something new keeps being invented. If there’s nothing new to build or think about, they prefer to destroy what’s already been built. “Hey, let’s tear this old thing down and rebuild something new.” If you walk into their office, the first thing you’ll hear about is their latest idea and why it’s important and revolutionary. When this person supervises others, there’s a lot of chaos among the staff, projects, and schedules. They’ll usually have a right-hand person who suffers while trying to keep up with the extreme amount of innovation, has learned to separate a passing notion from a true need for implementation, and struggles to coordinate all the moving pieces.

The reason that the Big I always pursues so many different ideas and opportunities is that they’re afraid of standing still and being trapped. To stand still is risk boredom and there’s not much more terrifying than that. So to ask a Big I to focus on one thing and complete it is like asking a crack addict to put down the crack pipe. It’s very, very hard and not a lot of fun at all.

In the hit 1985 movie Back to the Future, Christopher Lloyd plays Doc, a madcap inventor and a pretty good depiction of a really Big I. He always seems to have three new ideas running through his head; he has a garage full of half-completed inventions; he’s enthusiastic; he loves to think big; and the viewer is never quite sure if he’s for real or insane because he’s so far out there on the edge. Notice when he’s most happy — when one of his ideas finally works! This clip is in a non-English language. It doesn’t matter. The qualities of the Big I are easy to spot in any language.

Big I Under Stress

When the Big I is under extreme stress, they tend think themselves into a corner. Because they see so many options, it’s hard to choose one. Thus, they’ll want the flow of options and counter options to stop so that they can pick a path and get out of the mess they’ve created. The Big I tends to seek escape when under duress. So if things are going poorly in the office, you can expect to find them thinking of a new idea, dreaming of a vacation or a fun new purchase, diving into entertainment, or generally trying to avoid reality. When angry, the Big I can get very volatile and hypercritical of others.

Big I and Other Styles

The Big I appreciates Producers because they act really fast to implement their vision. However, sometimes it can be frustrating to have to explain to the Producers why the Big I is changing the strategy again. “Can’t they see it? It’s so obvious!!” Besides, they are kind of boring and uncreative. They absolutely loathe Stabilizers who are finicky, slow, and say “no” a lot! They distrust other Innovators and view them as arrogant competition. They enjoy Unifiers because the Unifier is easy to be around, always has a supportive and encouraging word for their latest idea, and can be a useful ally in galvanizing support for their latest vision.

Managing a Big I

If you’re managing a Big I, you have an outstanding idea generator and a terrible implementer. If you have a good relationship, they’ll want to bounce new ideas off you frequently because they need to talk things through and weigh different possibilities. Often they can be scattered and inconsistent so you’ll need to make sure that the work is actually getting done and that the details are being well managed. Because the Big I is capable of generating so many new ideas, they are often unaware of how the changes they propose are hard for everyone else to keep up with. They overlook the intricate details involved in implementation and conveniently forget all of the half-completed projects they’ve left in their wake. If you praise them for having great ideas and get excited with them, you’ll have a loyal employee.

If Your Boss is a Big I

If your boss is a Big I, you will need to demonstrate your value by helping them complete the pieces of the puzzle they see in their mind. But whatever you do, don’t add to or change the vision for them. That would be like taking their paintbrush and drawing on their half completed canvas. It’s very risky and the Big I may never forgive you for it. Instead, ask questions, gently point out gaps in the planning, and always try to be enthusiastic about their ideas. Because a Big I changes their mind so frequently, you’ll need to be able to discern between a passing notion and real action item. “Oh that, we’re not doing that any more, I changed my mind this morning. Didn’t I tell you? Here’s what we’re doing now…” is something you’ll hear frequently.

The Big I thinks and speaks conceptually in big patterns and generalities. They see things others just can’t. They promote people who they believe can help them achieve their vision. They fire people who no longer fit the vision or who seem to be creating obstacles to achieving it. If they are away on a long airline flight, you can expect them to show up at the office with a list of fifty new ideas and improvements.

The Big I can’t stomach saying “no.” For them, saying “no” means shutting the door to new opportunity. If you present a proposal to a Big I and they do say “no”, unlike a Big S, you can’t go back and try again. That’s it. It’s over. They’ll likely snap your head off if you try again. Consequently, a “yes” from a Big I doesn’t really mean “yes” either. A “yes” for a Big I is more like “sure, sounds pretty good, let’s explore it more.” For example, if you were to ask a Big I, “Mr. Jones, what do you think about this new prototype?” and Mr. Jones responds, “Hey, I like it! Very cool! We could also make it do this…” That’s not a legitimate go-ahead signal. When Mr. Jones comes back in two weeks and you show him the progress on the prototype, he’ll probably say something like, “What? Why are you working on this? I didn’t approve of this. It’s time you focus on the XYZ project, we’re already three months behind schedule!” So a “no” is a final “no” from a Big I but a “yes” is more of a “maybe.”

Summary of the Innovator Style

To recap, Innovator qualities are what allow us to sense and adapt to change and to find creative solutions and new opportunities. Innovators are creative and dynamic. They have an innate ability to see things others can’t yet see. When taken to an extreme, the Innovator turns into a Big I and can become overzealous in pursuing too many different strategies, all half-baked and constantly changing. 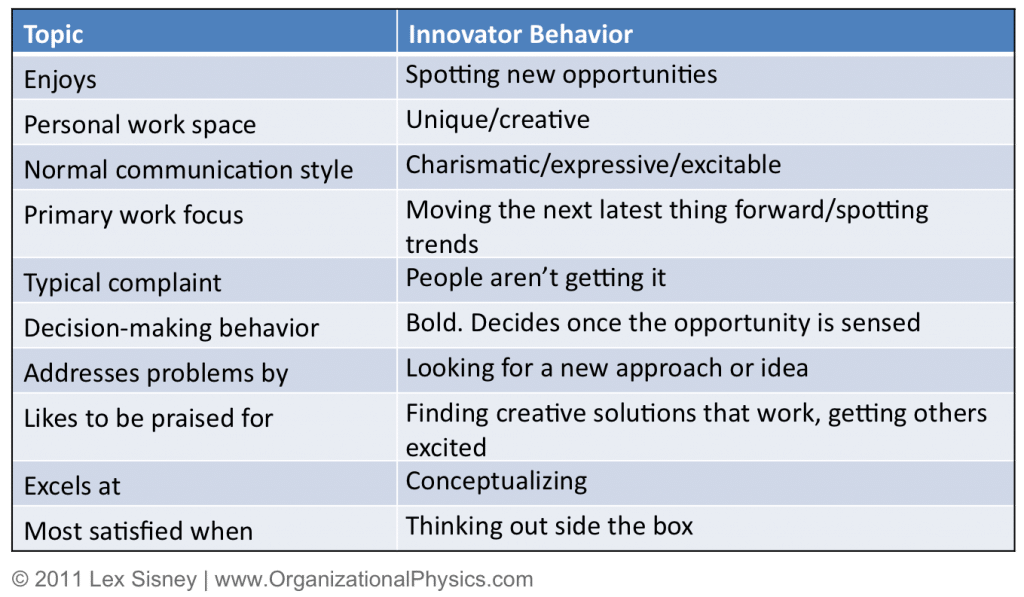 Next to The Unifier Style