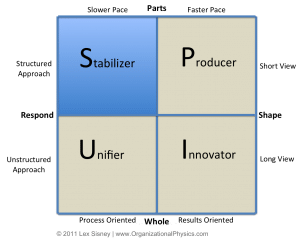 The Stabilizer is focused on how to do things and working methodically to get them done the right way. To get an immediate sense of the Stabilizer’s qualities, think of a very structured, process-oriented person who likes to analyze the data before making a decision. This person is highly organized, has outstanding attention to details, and takes their time in their words and actions. That’s a Stabilizer. If you put this person in a rowboat and say, “row!” What will they do? Well, first they’ll analyze the rowing mechanism and plan the most efficient stroke. Then they’ll want to understand where they are rowing, for how long, what the best route is, when the water and food breaks will occur, and the prevailing winds and currents. Once everything is planned in detail, with two contingency plans in place, then they’ll start to row!

The Stabilizer has a tremendous ability to find better, more efficient ways of doing things. They excel at organizing, planning, controlling, and systematizing things. They create order out of chaos and usually have outstanding retention of pertinent details. The Stabilizer tends to value control over freewheeling innovation, unless that innovation can be analytically justified. They have little patience for errors, sloppiness, or anyone or anything violating a defined process or procedure without good cause. A Stabilizer is methodical and makes decisions based on analyzing the data and finding more efficient solutions. Naturally, it takes time to gather and analyze data and to understand the intricate details involved in a decision. Consequently, the Stabilizer moves at a deliberate pace in their thoughts, words, and actions.

When the Stabilizer trait is overly high, we call it a Big S. A Big S is like a bureaucrat that seeks to control for change by establishing and following processes. They value efficiency over effectiveness, even to the extreme. The Big S comes into work on time and leaves on time. If they have an office, it’s likely very clean and orderly with files neatly arranged and spreadsheets and objective data readily on hand. The Big S schedules regular meetings and always has an agenda prepared in advance. Their biggest frustration is that others aren’t following the process. Their common complaint is that others don’t pay close enough attention to important details.

The answer to most problems for a Big S is to analyze the data and document a plan. Because of this, they tend to falsely believe that proper planning can account for any contingency. Therefore, when getting schedule estimates from a Big S, recognize that the schedule will look excellent on paper. It will be very specific, down to each nut and bolt, but also totally incorrect because change is a constant. Consequently, there will likely be several creative ways to accomplish the same objective but much more quickly.

If you walk into their office, the first thing you might hear is how there’s a need for more process and control. When this person supervises others, there are usually a lot of other Stabilizers on the team because the Big S values adherence to standards and protocols as a top priority. They delegate frequently and monitor the work being performed using project plans and milestone reviews. Unlike the Big P, a Big S can’t manage a crisis well. There’s too much noise and confusion for them to quickly and accurately get a read on the situation.

In the 1954 movie The Caine Mutiny, Humphrey Bogart, plays a Big S. His character, Lt. Cmdr. Philip Francis Queeg, is a naval captain in WW2. He’s leading a ship into battle but he’s not focused on the important things such as the enemy, the morale of the crew, or the fighting condition of the ship. Instead, he’s consumed by following the inane procedures and protocols of the Navy to the letter. That’s a Big S. They’ll follow a process to the letter but miss the spirit of the intent, even if it means a mutiny by the crew.

The reason that the Big S must always plan is that they fear a lack of control. For them, a lack of control leads to bad things happening. So to ask the Big S to move more quickly, be creative, or take a huge risk is to ask them to face their biggest fear. When the Big S is under extreme stress, they tend to withdraw inwardly and focus on unimportant but controllable details. For example, Humphrey Boggart in the classic movie The Caine Mutiny played an extreme characterization of a Big S in the role of Captain Queeg. When under stress from a life or death naval crisis at sea, Captain Queeg could only resort to enforcing rules about the consumption of strawberries and his crew was forced to mutiny to survive.

Big S and the Other Styles

The Big S gets along really well with other Stabilizers because they value process, control, and planning. They don’t mind Producers as long as the Producer is not violating any procedures. But if they do, watch out. They distrust fly-by-the-seat-of-your-pants Innovators because Innovators have three new ideas per week, all of which cause more work and headaches for the Big S. They find Unifiers to require way more interpersonal connection and emotional support than they’re willing to give, so they prefer to avoid them entirely. If avoidance isn’t an option, they’ll smile tightly and find an excuse to get back to their private office where they don’t have to engage in intimate conversation.

If you’re managing a Big S, you rarely have to worry about them making errors and omissions. Instead, you need to be alert that they don’t fall into paralysis by analysis. A Big S needs lots of structure in their tasks and the best way you can support them is to give them the relevant data to analyze and then allow them time to process it. Be mindful also that, because the Stabilizer is outstanding at understanding the details, they may have blind spots around how the work is impacting others, how the big picture has changed and thus impacts the work being performed, and/or the real work effort involved in executing the plan. If you praise them for being accurate and thorough, you’ll have a grateful employee.

If Your Boss is a Big S

If your boss is a Big S, don’t expect a warm and open door policy but do expect a highly controlled and efficient work environment. If you have a need or a request to make, expect to hear “no” a lot since it’s hard for a Big S to say “yes.” This is because they tend to need a lot of information and time to analyze an issue before committing to a course of action. Therefore, a “no” from a Big S is more like a “not yet, I need more information.” Even if you get a “no” from a Big S, you can usually return with more information and revisit the decision later. Once you get a “yes” from a Big S, you can take it to the bank. It’s very unlikely that they’ll change their mind.

The best way to get a Big S to take action is to point out how something is violating an existing policy. If you can do that, mountains will move. If not, the next best course of action is to point out how the new decision will improve efficiency for the organization. But don’t try to appeal using your personal needs or by pursuing an innovative risk. For example, if you need a raise, don’t say, “My husband lost his job and we can’t afford to pay the bills.” That’s a personal appeal and it will fail. Instead say, “According to HR Policy 254, Level 2 employees shall be rewarded per annum by 5%.” And then make a case that based upon your job duties, you actually should be reclassified as a Level 1 and thus earn a higher salary.

Summary of the Stabilizer Style

To recap, the Stabilizer qualities are what allow us to be accurate, secure, and efficient. It permits the factual, deliberate, and methodical approach to planning and decision-making and creates a sense of order out of chaos. It promotes high quality and follow-through. It helps us to be cautious, thoughtful, and prudent when faced with the unknown. When taken to an extreme, the Big S becomes a liability by always valuing efficiency, even at the cost of effectiveness, and is at risk of paralysis by analysis. 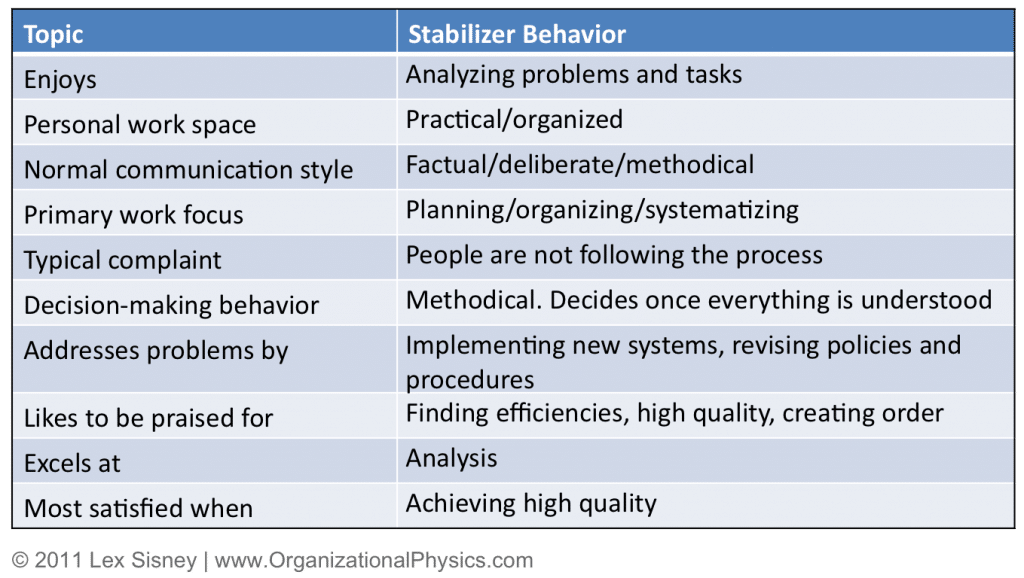 Next to The Innovator Style