Home/Articles/How NOT to Interview
Previous Next 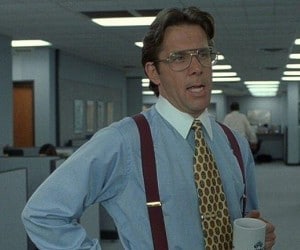 Sometimes the best way to understand what NOT to do in an interview is to go through a bad one yourself. I’ve definitely had this experience. It occurred when I was interviewing for an entry-level sales position with a fast-growing telecom company in Minneapolis, Minnesota. At the time, I was 26 years old, had just shut down my first startup, had burned through all my savings, and was in desperate need of a job.

A friend of mine told me about the firm one night over beers: “Hey Lex, I know you just shut down your startup. Sorry it didn’t work out, man. If you need a job to pay the bills, they’re always hiring where I work. It’s not the best job in the world but the money can be good if you work hard at it.”

The notion of hard work and good money sounded like a pretty good opportunity. I needed something I could throw myself into until I found my footing again. So I called the company the next day, told them I was referred by one of their existing reps, and set an appointment for an interview. To prepare, I practiced my spiel about why I’d be a good fit for their organization, polished up my resume, put on a suit, and went in with a mix of hope, anxiety, and chutzpah. 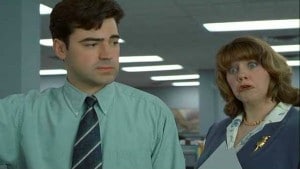 I arrived at their offices and approached the front desk. The receptionist, middle-aged and blurry-eyed, looked me up and down skeptically and, with a hint of exasperation at having to deal with me, said, “May I help you?”

“Ah yes, I’m here for an interview for a sales position. My name is Lex Sisney.”

She glanced down at her calendar and shook her head: “There’s no interview today. You first need to take the written test.” She reached into her file drawer and handed me a 50-question fill-in-the-oval-and-make-damn-sure-you-stay-in-the-circle scantron test. “If you pass the written test, then you’ll be invited back in for an actual interview.”

I thought to myself, “Really? Why didn’t they tell me this on the phone? I’ve got to take some psychobabble test before even speaking with someone? And is this the kind of place I want to work for? WTF. Well, I guess I need the money so I better play along.” Out loud I said, “OK, let’s take the test.”

“See the clock over there on the wall?” she said. “You have 30 minutes to complete the test. Have a seat under the clock and the time will begin. Do you have a #2 pencil?”

“Uh, no, I’ll need a pencil please. Do you have one?” She rolled her eyes and reluctantly handed one over like it was her last meal. I took the pencil, turned on my heel, and walked back to my assigned seat under the clock.

The test asked me questions about what I’d do in hypothetical situations like the following:

You see a co-worker take a company coffee mug from the storage closet and put it in his briefcase. You should:

a) report the theft to HR

b) ask him what he’s doing

c) take a mug for yourself

d) tell him to put the mug back

I snickered under my breath but played along anyway. I finished quickly and turned it in with 15 minutes to spare.

The receptionist scanned it over with a raised eyebrow to make sure I stayed within the circles and didn’t miss any questions. “OK,” she said, “someone will call you if there’s a possible fit,” and I left. (Note: Psychometric tests like this one have transitioned from #2 pencil to the web, but they can still be just as asinine.)

About a week later, the company called me in for the interview. I was told that this time, I’d actually get the chance to speak with the hiring manager.

I arrived early and re-greeted the receptionist. She seemed in a somewhat better mood this time: “Have a seat Mr. Sisney and Mr. Johnson will see you when he’s ready.”

After waiting for 20 minutes past the scheduled time (is this a doctor’s office?), a new voice spoke from the receptionist area. “Mr. Sisney? I’m Lidia, Mr. Johnson’s assistant. He’s ready to see you now.” 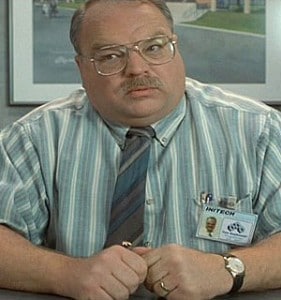 Lidia led me back through the cubicles and telemarketers to a large windowed office. There, at a small, round conference table sat “the Man.” As I was ushered into the office, he didn’t actually look up or greet me but sat leafing through some papers, extended a limp-fish handshake, pointed to a chair across the table, and sternly said, “Have a seat.”

After what seemed like five minutes of just sitting there, he finally looked up from his reading, made eye contact for the first time, and with pursed lips told me, “I’m concerned about your ability to conform.”

“Excuse me?” I asked trying to mentally process what he had just said. He placed one of the pages he was reading on the table and with two fingers slowly twisted it towards me so I could read it.

“You see this chart? This fourth column is conformance. Your scores in these other three areas are very high but you have the lowest conformance score of anyone I’ve ever seen.”

“No,” he frowned. “But tell me, why should I believe that you can conform to our way of doing things here?”

I tried to dance and weave and sell him on the idea that non-conformity really meant “creativity” but I didn’t think he really bought it. The interview lasted about 10 minutes total and I left thinking it had all been a big waste of time.

Surprisingly, they called me a few weeks later and offered me the job.

“No, thanks,” I said. “It seems like you’re looking for drones for your empire. That’s not really me.”

So what did this company do wrong in the hiring process? Alas, let me count the ways…

First, they were focused on the wrong things. It’s clear that this company was suffering from high turnover in the sales team so they tried to fix the problem by weeding out risky candidates (like me) using a psychometric profile test early in the hiring process.

In effect they were saying, “Turnover is costing us a lot of money. We must control for it by only hiring reps who can conform to our process.” Did it work for them? No! They still had high turnover in their sales team; those they did attract were of the lowest common denominator; and their entire recruiting process became a bureaucratic numbers game.

You don’t want to strive for conformity in your employees or in the candidates you select in the hiring process. Conformity is like monocultures. Easy to plant and hard to maintain—in addition to making the system brittle, stagnant, and tired over time.

What you do want in your organization is diversity—a diversity of styles and perspectives built around a common vision and values. Diversity is harder to design for than conformity but it ultimately makes things alive, vibrant, and adaptive over time. The right hiring process won’t reinforce conformity. It will support the selection of a diversity of styles and approaches that complement the surrounding team and environment.

Second, they treated people like discardable cogs. Every interview is a significant sunk cost. If you’re going to have one, you better make the most of it. Treat everyone you interview with dignity and respect, and use the interview as an opportunity to win hearts and minds. You never know—that lowly job candidate may one day be very important to your organization’s success.

In the personal story I just told you, soon after I turned down the company’s job offer, I started another company that went on to be hugely successful. Early in our growth stage, I needed a telecom partner to build and manage a complex phone system. In fact, I ended up spending several million dollars on our phone system over the coming years.

Which vendor do you think I didn’t call? Why would I call them? I got a chance to peek behind the curtain of their organization and I didn’t like what I saw. The process was haphazard and the people were rude. I wanted nothing to do with them—not even as a vendor.

It would have been a different story if this company had actually taken the time to treat me and other candidates like real people, not cogs in a machine to be used or discarded. People forget what you tell them but they always remember how you made them feel. In this era of social media transparency, that’s especially critical to remember. Treat everyone, especially potential job candidates, as a potential future customer.

Third, they lacked a strong foundation. Didn’t you get a sense of how crappy this entire organizational culture really was? Even the most amazing hiring process in the world won’t cover up a pile of shit. Your organization must have a strong foundation in place. It must have the right growth strategy as well as the structure, vision and values, processes, and team to support that strategy and adapt to changing conditions.

There’s a saying that how you do anything is how you do everything. It’s no surprise that this company went public a few years after my interview and then went bankrupt a few years after that. Why? They initially grew on market demand for their existing products but when the market demand shifted, they couldn’t adapt. They had conformed to the past and lacked a strong foundation to adapt to the future. Building a strong organizational foundation is outside of the scope of this work but if you’re interested in the principles, I encourage you to check out my book Organizational Physics: The Science of Growing a Business.

Fourth, they treated the interview like a competition, not a collaboration. A job interview shouldn’t be viewed as a competition where the winner tries to guess what the company really requires and the loser gets sent home. Instead, it should be viewed as a collaboration between a qualified candidate and the company to see if there’s a mutual fit.

Think about it. As the candidate, I want to know if this job is a natural fit for my skills, vision, values, style, ambitions, and desired compensation. If not, I don’t want to work here any more than you want me to. The company wants to know the same information about me.

The purpose of interviewing, therefore, is to allow both sides to determine if there’s a mutual fit. The “collaboration, not competition” mindset is a heck of a lot more fun for both the hiring manager and the candidates. Of course it requires having a really solid framework and hiring process in place that allows that to happen. Otherwise, you put yourself at risk of being “gamed” by candidates who just want a paycheck, rather than a mission.

If you’re interested in learning the steps to a breakthrough interview process, then you may want to check out my newest book, How to Think About Hiring: Play Smarter To Win the Talent Game, from which this article is an excerpt. But in any case, do these four things as you approach the interviewing process and you’ll set the stage for better results:

2. Treat everyone with respect.

3. Hire from a strong foundation.

4. Make it a collaboration, not a competition.