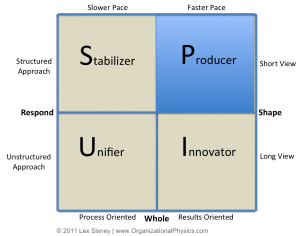 The Producer is focused on what to do now and working hard to get it done rapidly. To get an immediate sense of the Producer’s qualities, think of a fast-charging, focused, determined, high-energy person who thrives on working long and hard. That’s a Producer 1. If you put this person in a rowboat and say, “Row!” What will they do? Well, they’ll just start rowing straight ahead — and fast! They don’t need to ask questions, plan a route, understand where they should go, or even how long they’ll be gone. They just row and keep rowing until you say, “Stop!”

The Producer has a tremendous capacity to work hard to accomplish a goal and takes great pride in winning. That could be winning the new account, completing the project, achieving a goal, or beating the competition. A Producer is decisive and makes decisions based on what can be accomplished now, without waiting for all the information to be in hand. Instead, they figure it out as they go. Our best Producer qualities are our ability to act, lead the charge, overcome obstacles, urge a team to action, and be effective, assertive, and victorious. A Producer is a lot like the engine of a car. The bigger the engine, the faster the organization can go.

When the Producer trait is exceedingly strong, we call it a Big P. A Big P is like a hammer. It sees every problem as a nail and the solution is to hit it. Hit it with hard work, more work, and faster work. The Big P comes into work very early and leaves work very late. If they have an office, it’s likely very messy with lots of projects and tasks to complete (and usually awards and trophies on display). The Big P doesn’t like to have meetings unless they’re short, to the point, and focused on the most pressing task at hand. Their biggest frustration is that things aren’t getting done fast enough according to their own internal clock. Their common complaint is that others aren’t working as hard as they do. Their answer to most problems is to work harder, longer, and faster. Because of this, they tend to overestimate the amount of work that can be accomplished by a team. Therefore, when getting schedule estimates from a Big P, recognize that they are going to significantly underestimate the actual time it will take to complete a team project. If they say one month, it will be more like three to four months.

The Big P can’t stomach falsity and they’re often brutally honesty in their communications. If you went into their office, the first thing you’d hear about is how hard they’ve been working and how much they still have to complete. When this person supervises others, there’s a lot of anxious waiting by the staff because the Big P is not very effective at delegating. Often, they delegate at the very end of a project when they just can’t do the work themselves and a deadline is fast approaching. The staff then leaps into action to try to solve another last-minute crisis.

The reason that the Big P always has so much work to do is because they value themselves and others based on how much work they do. Delegating tasks or planning ahead to avoid a crisis actually decreases the Big P’s sense of self-worth. The Big P thrives on averting crises. And the bigger the crisis, the better. In fact, sometimes the only way you can get their attention is to present a new crisis for them to fix.

In the 1992 movie Glenn Gary Glenn Ross, Alec Baldwin plays an extreme Big P. His character, Blake, is sent in by Mitch and Murray, the faceless owners of a real estate office, to motivate the salespeople. Blake shows up with a pair of brass balls, cusses out the sales team, and announces a contest where only the top two salespeople will get the more promising leads and everyone else will get fired. That’s a Big P. Perform or else – and do it quickly.

When the Big P is under extreme stress, they tend become erratic in their actions. They will tend to make a lot of mistakes because they can’t see the big picture, understand the details, or communicate and unify the rest of the organization. It’s the classic “Fire, Ready, Aim!” When angry, the Big P tends to lash out verbally, tell others what to do, and becomes domineering or aggressive.

Big P and the Other Styles

The Big P gets along really well with other Producers because they value hard work and move at the same fast pace. They don’t mind Stabilizers as long as the Stabilizers don’t creating “unnecessary” barriers to getting work done. But if they do, watch out. Producers respect an Innovator’s ability to see into the future but dislike Innovators who cause too much chaos or changes in strategy because that requires Producers to have to re-focus and change their work. That’s hard for a Big P to do. Producers will often judge Unifiers as sycophants who don’t do any real work, chitchat all day, and play the political winds – unless, of course, a Unifier can help the Producer alleviate obstacles that are in the way of getting tasks completed. In that case, they’ll form an uneasy alliance.

If you’re managing a Big P, you never have to worry about them working hard enough or finding the inner motivation to complete a challenging task. Instead, you need to be mindful that they don’t run too far in the wrong direction. While another style might require the symbolic whip to trigger them into action, the Big P will need a set of reins to slow them down. A Big P needs a high level of autonomy in their tasks and the best way you can support them is to help eliminate obstacles that prevent the work from getting done. Be mindful also that, because the Big P is outstanding at completing the tasks at hand, they may have blind spots around how the work is impacting others, how the big picture has changed, and the intricate details involved. If you praise them for being productive and celebrate and honor their victories, you’ll have a loyal employee.

If Your Boss is a Big P

If your boss is a Big P, you will need to demonstrate your value based on measurable achievements and by how long and hard you work. That is, if you’re working long and hard and producing tangible results such as sales wins, products launched, hours billed, or capital raised, then you’ll be in good standing with your boss. If you need a request fulfilled, you better phrase it quickly and to the point and be able to show how it is necessary for completing short-term tasks and goals. The Big P values actions more than words and has little patience for politics, bureaucracy, or anyone and anything they view as standing in the way of what they want to achieve.

The Big P thinks and speaks literally. They are plain spoken. A “yes” means just that and a “no” does too. Therefore, a Big P takes you at your word as well. If you say you’ll do something, even in an off-hand way, they’ll remember it and hold you to it. If you follow through, you’ll be accepted and rewarded. If you fail, you’ll lose favor with the Big P, regardless of the surrounding circumstances. The Big P loves to reward and promote for performance and to fire for a lack of performance. It’s black and white. So when its time to discuss your performance review, be prepared to validate your wins and state how you will mitigate your losses going forward. If you keep failing to hit your stated goals, you’re at risk of getting fired, regardless of the circumstances.

Summary of the Producer Style

Producer qualities allow us to work hard, achieve our goals, and be decisive and effective in our actions. They provide the engine for accomplishment. When taken to an extreme, they turn into Big P – a giant hammer that only sees what’s in front of it, gets overwhelmed by taking on too much, and seeks to alleviate its frustration by pushing things to go faster. 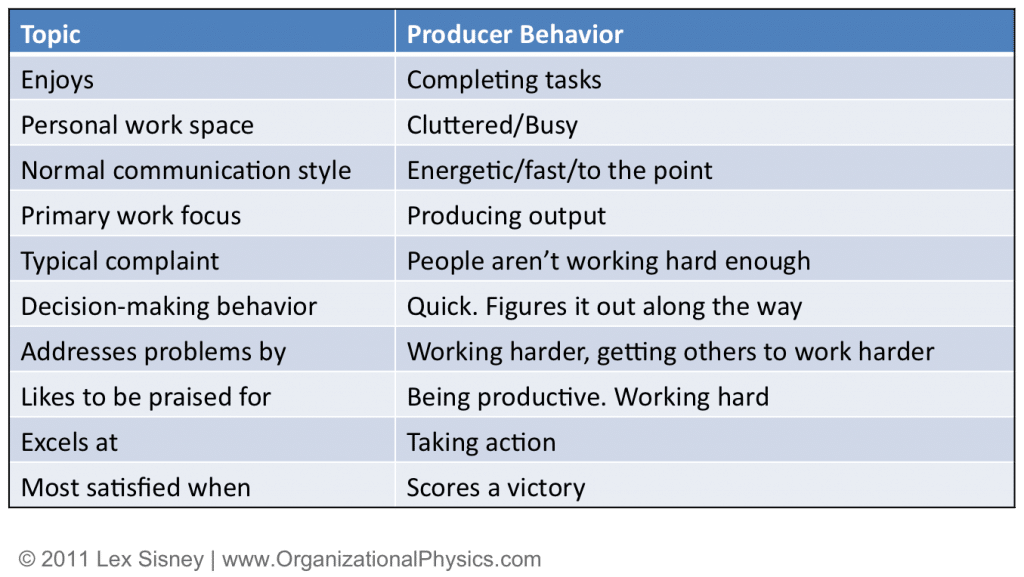 Next to The Stabilizer Style